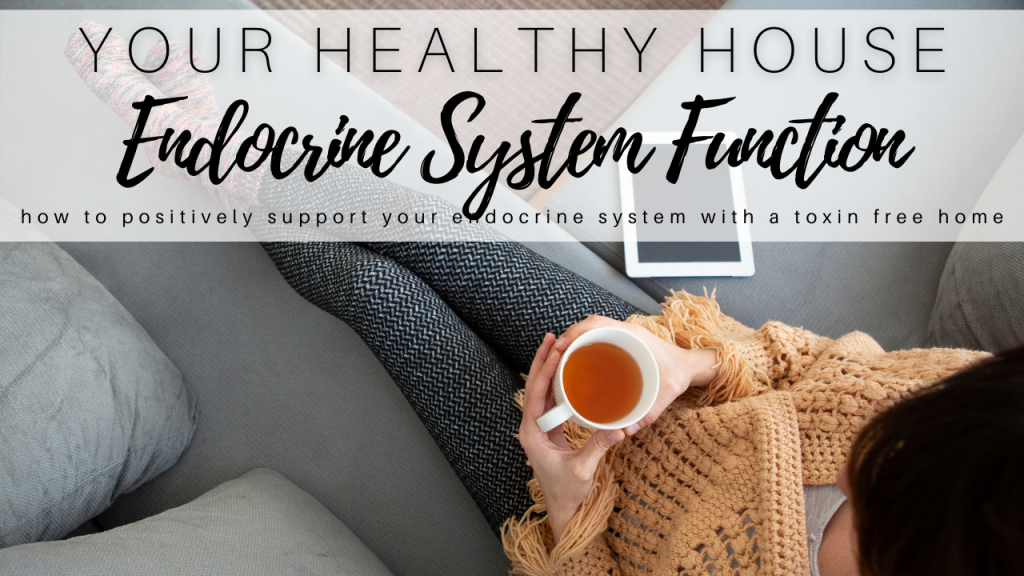 For a long time I had no idea WHAT the a healthy endocrine system function was.  I knew very little about my own health and wellness other than I wanted to eat somewhat healthy and exercise.  Over the years and learning about various toxins in my own home and in my own arsenal of beauty products, the term “endocrine disruptor” kept resurfacing.  Still, I didn’t really know what it was other than it was bad news.

It wasn’t really until maybe a year or so ago that I really started to understand that the endocrine system as a whole supports many of the systems in our body that work together to keep us healthy.  Even more so, I saw how important a healthy endocrine system was in keeping my kids healthy.

I think that understanding healthy endocrine system function is one of the best ways to help yourself when it comes to a healthy house.  I often talk about the fact that each of us needs a “why” in our corner that spurs on healthy changes.  If your body’s biggest health component isn’t a “Why”, I don’t know what is.

First, I think it’s important to understand the endocrine system itself.  Endocrine glands produce and release hormones into your bloodstream.  The hormones produced then travel to all of your cells.  These hormones are responsible for controlling mood, growth, metabolism and development.  They also play an intricate role in how our other organs function as well as the reproduction of cells.

The endocrine system directly controls the levels of various hormones such as melatonin, insulin, estrogen and the thyroid, just to name a few.  While there are over 50 different hormones that have various functions throughout the body, each one plays a serious role in our health and wellness.

A healthy body and endocrine system function means our body is functioning as a whole on a more natural level. 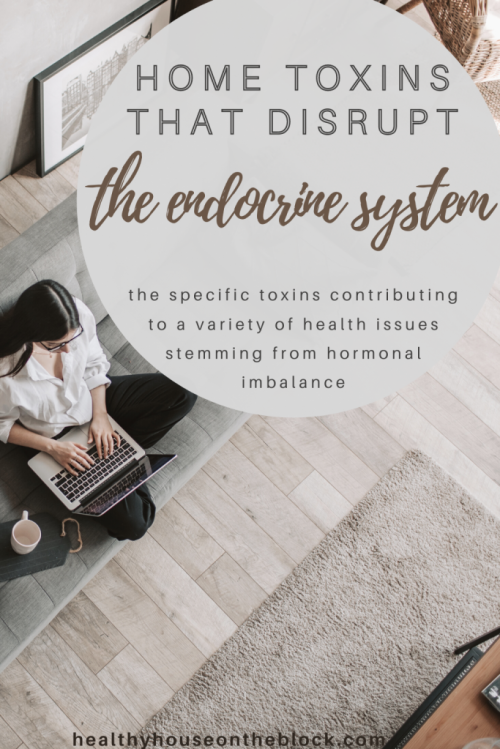 Just because I think it’s super eye opening, below are sixteen of the major hormones and their function in the body:

This list really points to the body’s reliance on a healthy endocrine system to perform and be in a state of health and wellness. 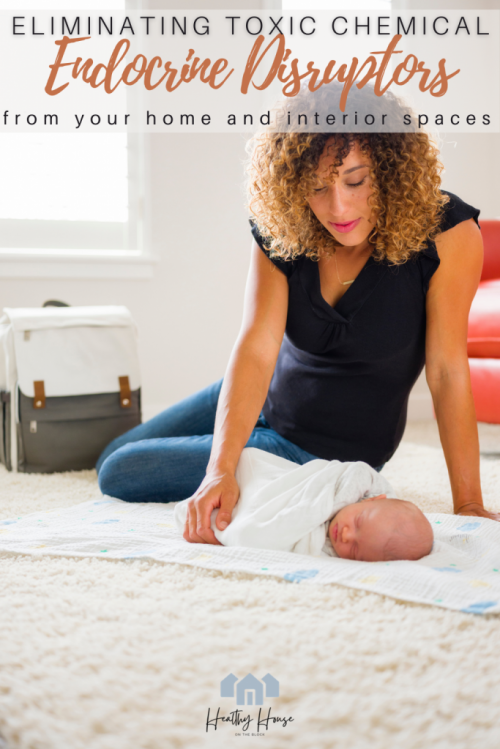 Many of the toxins in our environment get absorbed into our bodies.  Once absorbed, some of these chemical toxins act as endocrine disruptors, which can do one of  three things (INFO):

Because the endocrine system is finely tuned, just a small change can affect the body in a big way.  And while perhaps contact with one small endocrine disrupting chemical may not make a big impact, in today’s world we are bombarded with many different chemicals that tax our endocrine system.

Endocrine disrupting hormones have obvious effects on areas like the reproductive system, thyroid and our sleep function.  But there’s also a trickle down effect that takes place as our systems begin to function improperly.

What’s alarming, I think, is that even before babies are born, they are coming in contact with endocrine disruptors that are actually affecting their systems and how they will perform over the course of their whole life.  This is why it’s especially important to be aware of what we’re eating, the products we’re using as well as the home we’re surrounding ourselves with.

Another side effect of hormone disruption and taxing the endocrine system so that it doesn’t produce hormones in the correct amount is directly linked to the immune system.  This correlation between a decreased or compromised immune system and endocrine disruption trickles down to our metabolic health.  Specifically, we have seen a rise in autoimmune diseases such as diabetes.

This article talks about research done showing that endocrine disruptors are metabolized differently by gut microbiota, which can alter the absorption and distribution of the chemicals in the body, but ultimately leads to various types of inflammation in the gut and other organs. 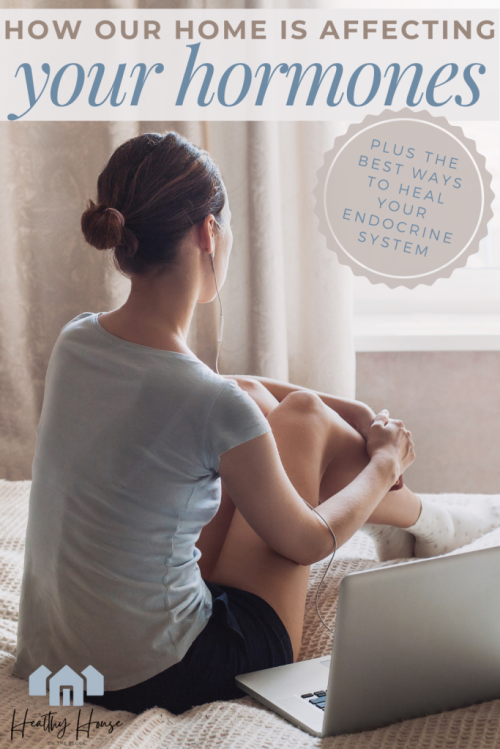 Parabens:  Probably one of the most commonly talked about endocrine disruptor right now is parabens.  Parabens are a preservative used in many personal products like lotions, hair care, toothpaste, deodorants and shaving creams.

Phthalates: Found in plastics, nail polish, hair spray  and fragrance, phthalates are another big player in the endocrine disruptor space.  If you look around your home you can see many plastic products you come into contact with every day that likely contain phthalates. This blog post goes super in depth about phthalates the specific places they’re found.

Fire Retardants: Furniture, carpet, mattresses and baby and kid products often have fire retardants in them.  PBDEs, a type of chemical flame retardant, contribute to endocrine disruption as the tiny particles from these home items can end up in dust and eventually in our airways.  This blog post has some good options for eliminating flame retardants in your own home.

Bisphenol A: Not only is Bisphenol A a detriment to healthy endocrine system function, but so are all of the Bisphenol toxins (BPS, BPB, etc.) that have started replacing BPA in products.  Essentially almost any plastic product, from baby bottles to household products contain some soft Bisphenol toxin.  I recently wrote up a list of helpful swaps for your home to reduce the amount of plastic containing Bisphenol toxins, which you can find here.

Perfluorinated Chemicals:  Also known as PFCs, this toxin is in stain resistant and water proofed fabrics and textiles such as carpets, furniture and drapery.  It’s also the chemical found in teflon and non-stick pans.  This blog post will help you reduce PFCs and PFOAs around your home to reduce your body’s exposure to endocrine disrupting chemicals. 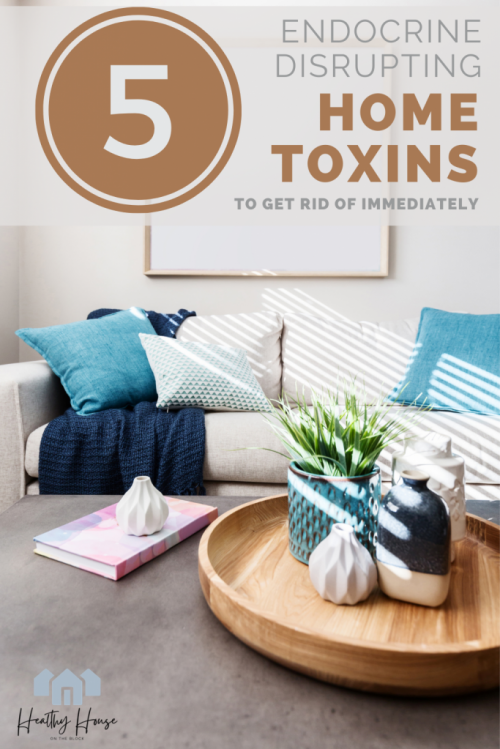 HOW TO RETURN TO HEALTHY ENDOCRINE SYSTEM FUNCTION

First, removing environmental pollutants that we discussed here will immediately remove a large burden from your everyday life.  Start with simple changes like reducing personal care products with chemical toxins in them like parabens and phthalates.

One of the best ways you can eliminate a large grouping of endocrine disruptors is by removing fragrance from your home.  This means anything from scented candles to air fresheners and perfumes.  These most commonly contain parabens and phthalates and do not need to be disclosed to the consumer.  Eliminating fragrance could mean removing your largest contributor.

Eating a more natural diet, especially one rich in healthy fats can go a long  way in supporting healthy hormone production.  Adaptogen herbs have also been known to have a positive effect on the body in terms of natural hormone production.  And while we’re talking about diet, reducing dairy is another beneficial way to allow your endocrine system to heal. Dairy typically contains many natural hormones that weren’t intended to be combined with our bodies’ hormones.  While you’re at it try to eliminate anything processed or artificial, which contributes to endocrine disruption.

Sleep and exercise are also part of a healthy endocrine system function.  Getting the proper amount of sleep and getting daily exercise can help improve function by reducing stress and increasing serotonin.  And as for exercise, it could be something as simple as walking or it could be yoga or high-intensity training.  Not all exercise is going to be right for each person, so finding a type of exercise that leaves you refreshed and energized is key. 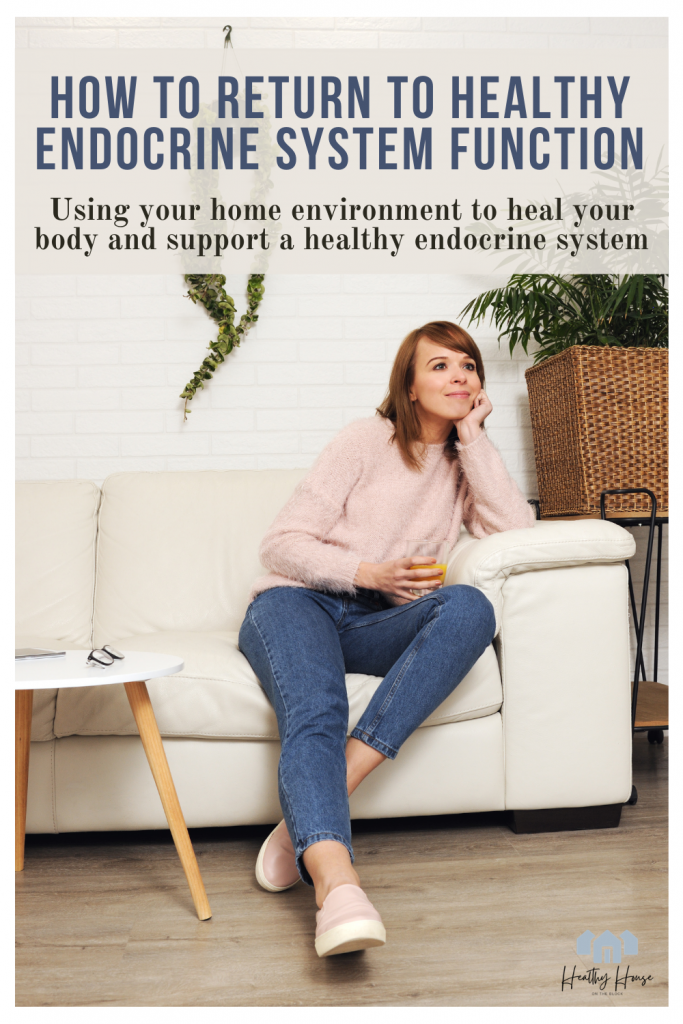 Essential oils are another way you can support your endocrine system function through creating a positive feeling, helping with feelings of anxiety and depression.  Some essential oils you can use for aromatherapy are: 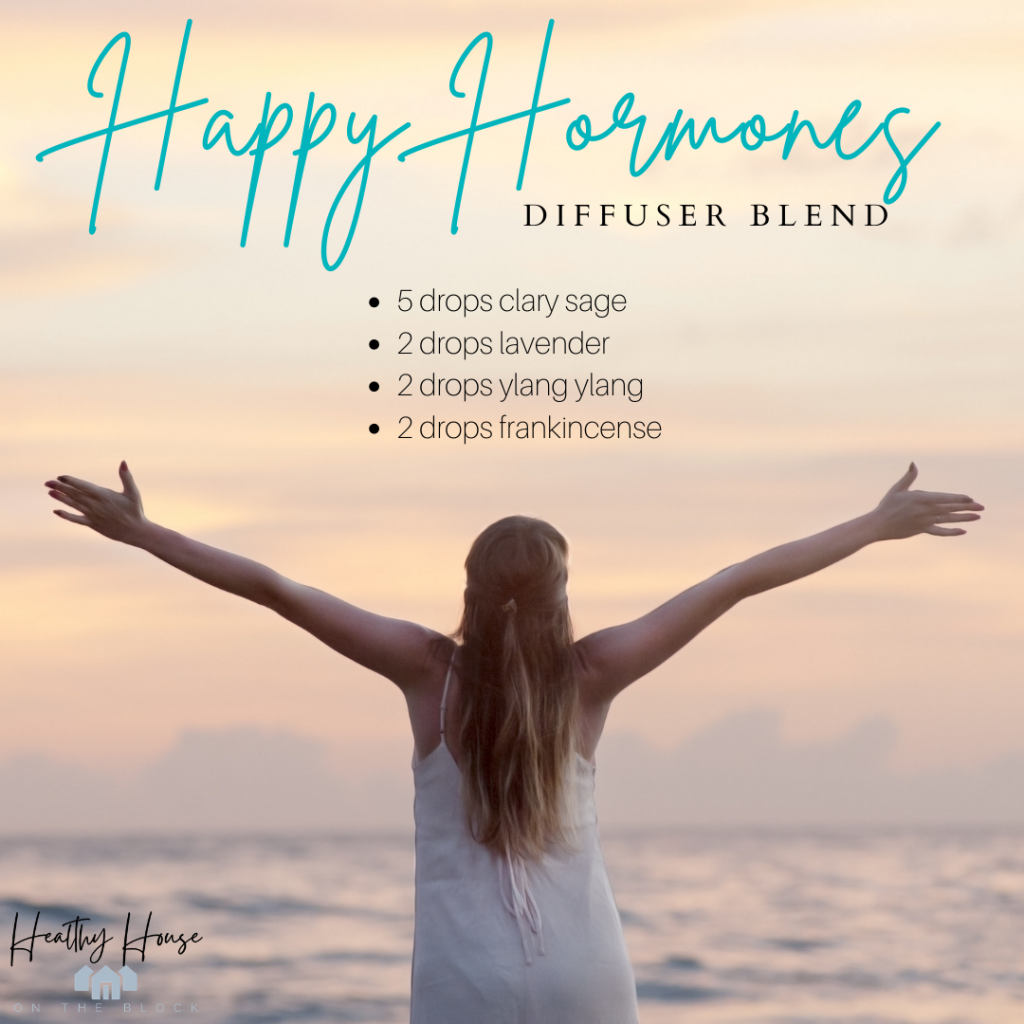 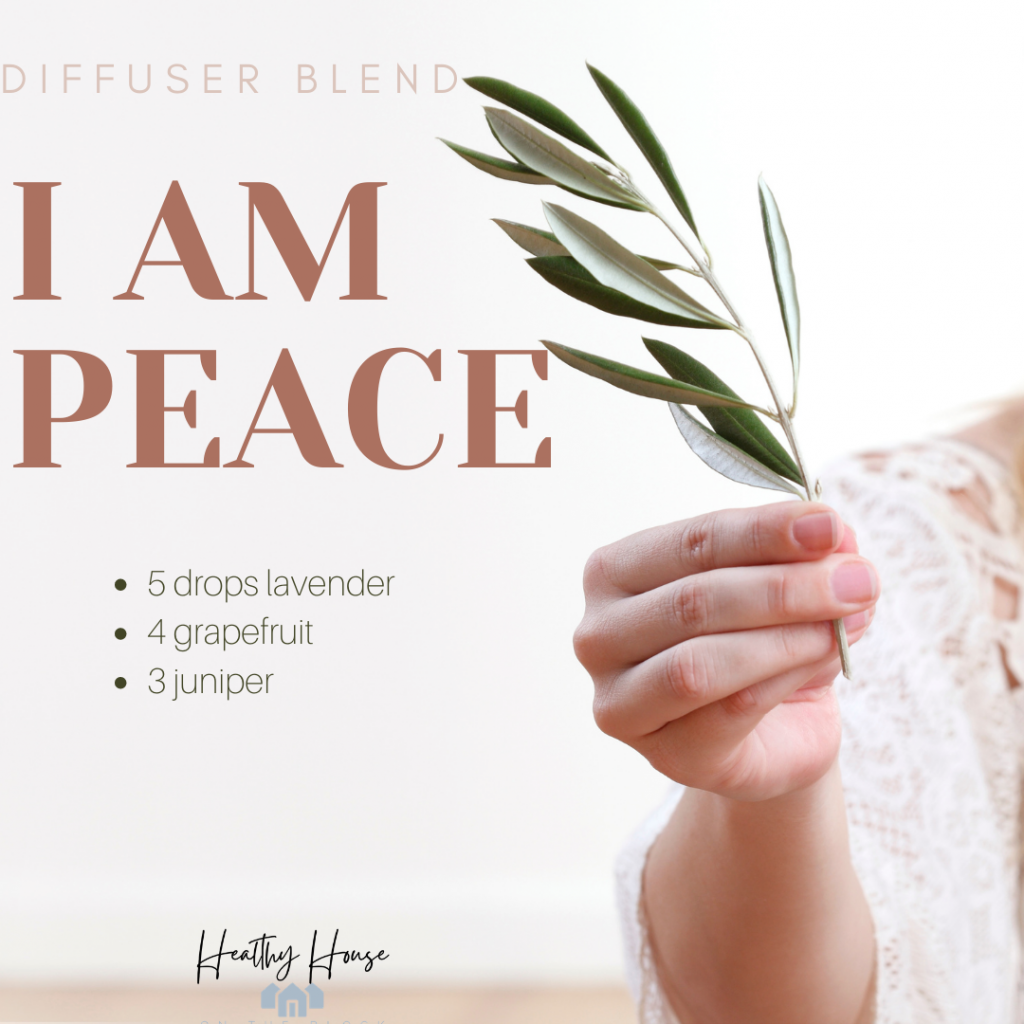 I am Peace Diffuser Blend 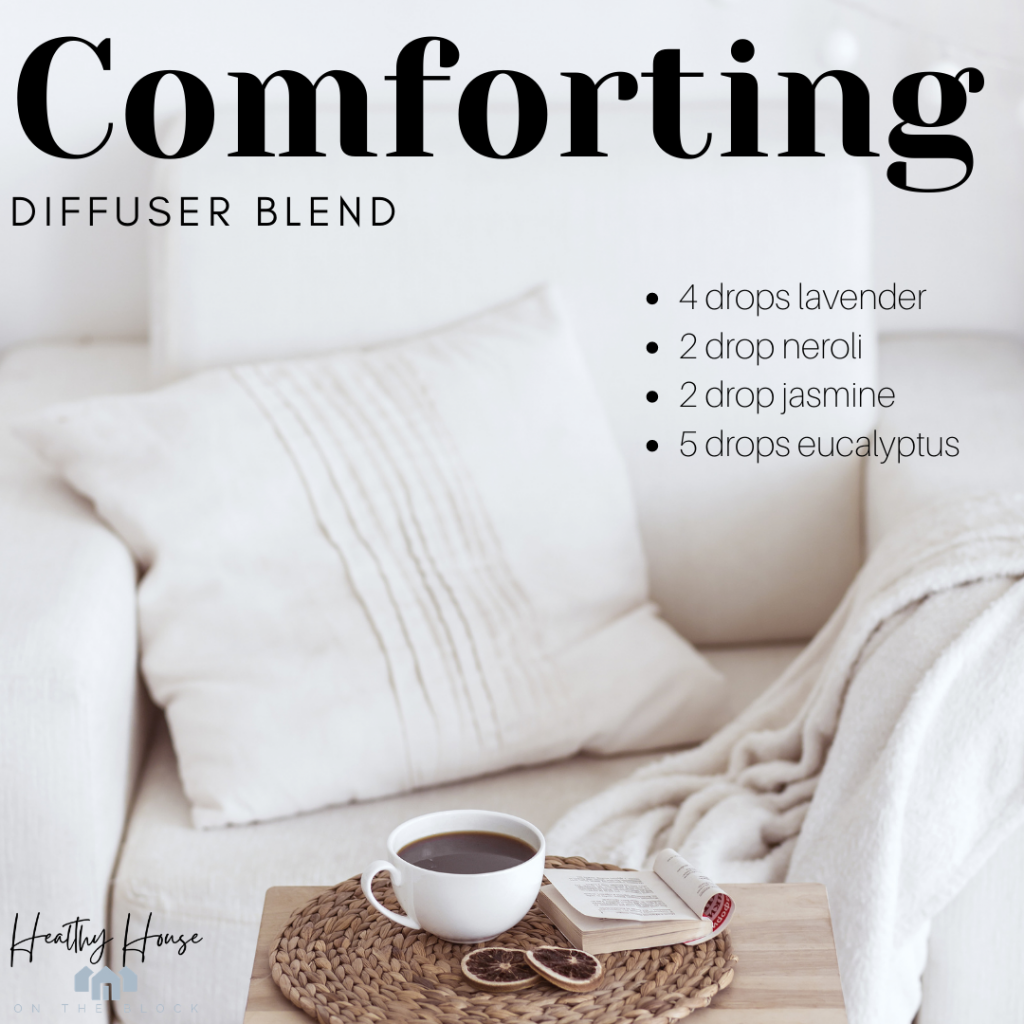 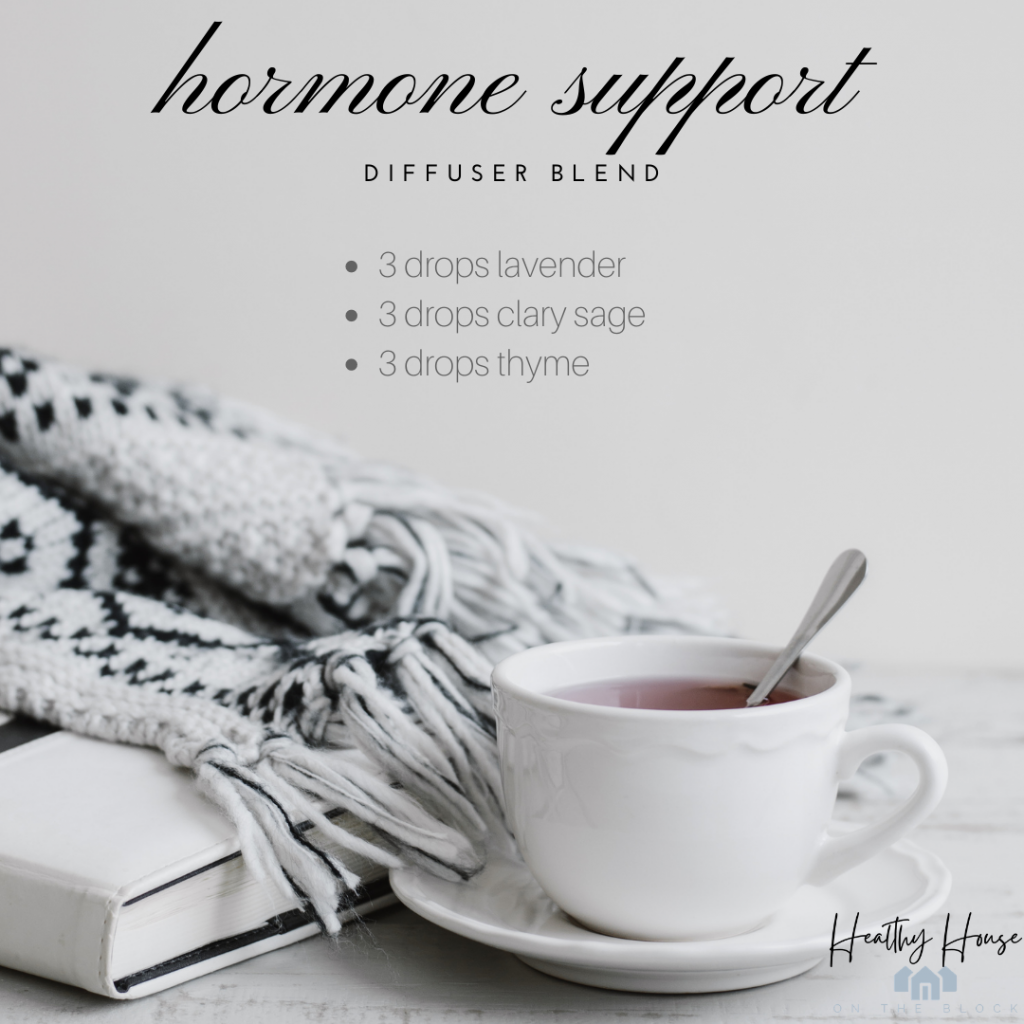 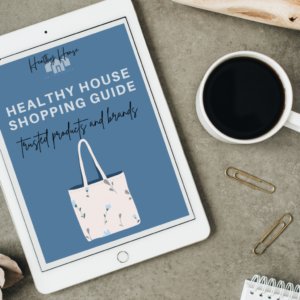 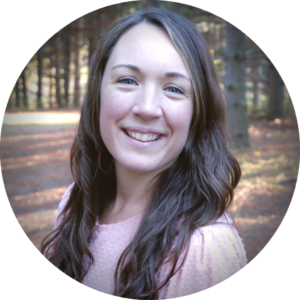 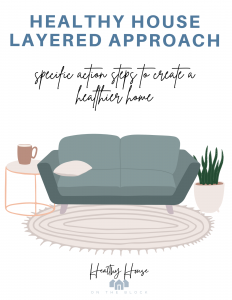